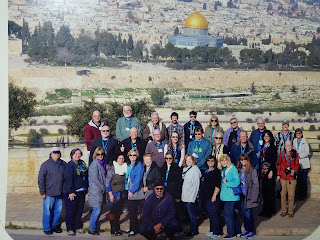 we had a group photo taken there before we began the Palm Sunday walk. That is the steep path down the hill to the Garden of Gethsemane and the Church of the Nations.


Along the way we stopped at the teardrop church (Dominus Flevit Church) where Jesus paused on Palm Sunday and wept for the destruction of Jerusalem that would occur about 40 years later. 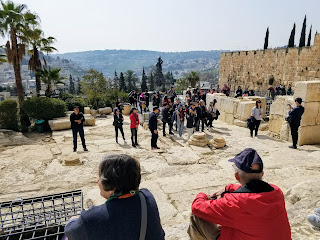 In Gethsemane we could see an olive tree about 300 years old whose roots could date back to the time of Jesus.
Through the Dung Gate to the Teaching Steps, where we heard the story of Jesus teaching in the Temple and some of the parables, and prayed. The archaeological work in this area is interesting and as a result of it, we can see some of the hundreds of ritual baths that were used by pilgrims before entering the temple.
As we left Jerusalem, Ibrahim pointed out that we were passing through the Hundred Gate area where the Ultra-Orthodox Jews live. 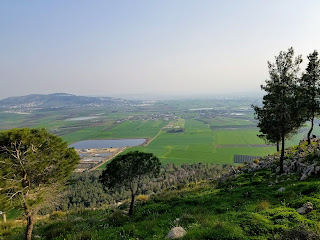 We decided to go to Megiddo today and have lunch there. We drove out the #1 highway toward Tel Aviv, through green terraced areas with lots of cypress and pine trees, some almond groves and other agricultural areas, increasingly common as we neared the coast. AND NO TRASH ANYWHERE! Part of the route is bordered by the separation wall.
We lunched at Tel Megiddo, then climbed to the top for the view out over the Jezreel Valley, which according to the book of Revelation, will be the site of the final battle between good and evil -- Armaggedon. We could also see Nazareth on a hill in the distance, with Cana beyond -- our next two destinations. From the top of Tel Meggido, we climbed down through the water system they used during seiges. It was a little steep and confined, and some of the stairs had open treads that were hard for using a cane and also caused a bit of vertigo but we all made it without incident. At the end we climbed up and out of it outside the city walls to where the bus was waiting. 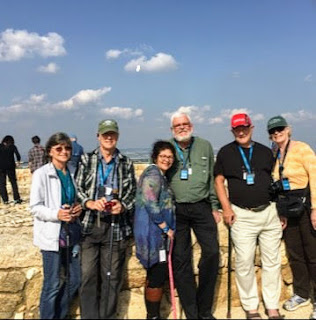 Mount Precipice, outside Nazareth, commemorates Jesus' rejection by his home town, when the crowd threatened to throw him from a cliff. 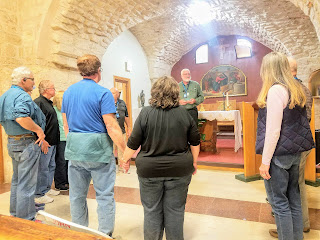 In Cana we went first to the church, where 6 couples renewed their marriage vows, then on to a wine store, where we sampled and bought local wines.
Finally in Tiberius we checked into the Leonardo Club Hotel in time for dinner.


More Photos from the Jerusalem to Tiberius Experience