The overnight flight wasn't too bad and most of us got some sleep. Frankfort Airport was another whole story.  Although Nanci had had a wheel chair in New York, there wasn't one for her here, and when we asked to be transported on one of the motorcarts, the driver rudely shoo'd us away exclaiming that she'd lose her job if she gave rides to anyone who hadn't reserved.  She said we could reserve it now and wait 45 minutes.
So we walked, very slowly, from concourse Z to concourse B - part of it by train. Nanci, Larry, and I were the only people in sight through several vast corridors.  Nanci wondered if the Rapture had occurred and we'd been left behind. Somewhere along the way, the lady who'd refused to give us a ride, whizzed by with her empty cart and we saw several others sitting idle.  Not at all like previous experiences in this airport.
Finally we arrived at Security, where David had been pacing and looking for us (he had Nanci's passport and boarding pass).  But we still had about 20 minutes before pre-boarding. 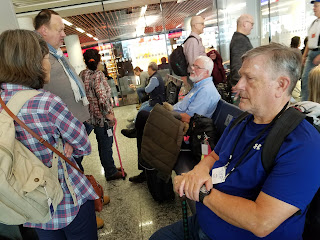 Once we were sent down the Jetway (as the first of the fully-booked horde) we found the door into the aircraft closed and locked.  Another gentleman knocked on the fuselage and the cabin crew were most surprised to see us when they opened the cabin door.  So we waited another few minutes, then boarded.
Lufthansa at least seats couples together and their groups in near proximity, and that's nice. Also pretty good food - smoked salmon and potato salad and horseradish, chicken with orange sauce and  rice, Camembert, chocolate-walnut brownie and wine.
With a 4-hour flight to Amman we landed at 7:30 pm local time and an EO rep met us and walked us through the formalities.  The bus ride to the Crowne Plaza Dead Sea Resort was about an hour, so he gave us some insights into Jordan and pointed out the lights of Jerusalem and Jericho.  The hotel is beautiful and they had held dinner for us, kept the dining room open for us until 10:30.  It was delicious.  We're exhausted but need to get organized so it won't be many hours sleep before the 5am wake up call for our day in Petra.
Posted by Janice Hatt