Another very early start as we set out under cloudy skies to Mount Nebo. It's a long, steep climb and we were very glad to be doing it by bus. 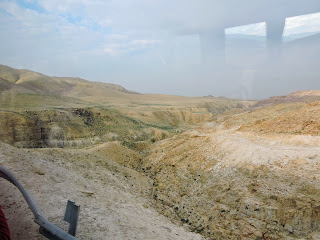 It makes you really respect Moses for doing it on foot at the age of 120. Twice! The view was slightly obscured by haze but we could see Jerusalem and Jericho. 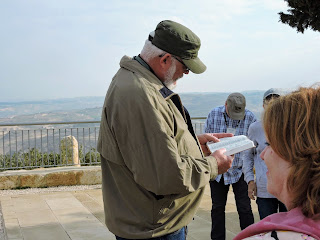 Pastor David read the story of Moses' visit from Deuteronomy 34. 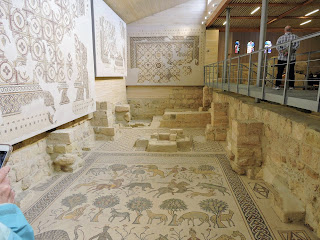 Inside the church, we saw mosaics dating from the 4th to the 8th century AD. There has been a church on that site for that length of time, but it has been changed and rebuilt a few times, so it's a wonder the mosaics are in such good shape. 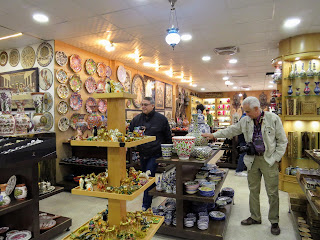 A mosaic workshop, established by Queen Noor to provide employment to people with physical limitations, was an interesting stop, with many beautiful creations. A few people bought pieces. 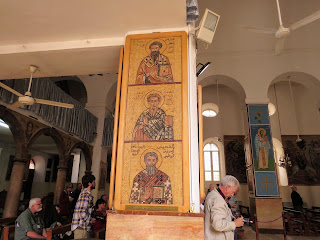 In Madaba, we walked uphill through the old town to St. George's Orthodox Church, where a Byzantine mosaic map forms part of the floor. It had been unknown for many years  but was uncovered in 1980.
Our border crossing to Israel was a bit tedious, but non-eventful. We have a new bus, driver and guide. We started in right away with a late lunch in the chaotic cafeteria at Qumran, followed by a quick look at the  Essene waterworks 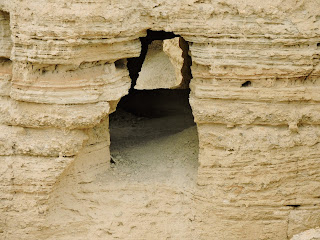 and the caves where the Dead Sea Scrolls were discovered. It was cold, very windy and a little rainy, so we weren't tempted to linger.
On to a viewpoint from which we could see the Mount of Temptation. 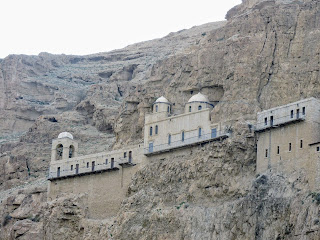 A large monastery clings to the side of the mountain, with a small church that was built around what is said to be the rock on which Jesus sat during the first two temptations. There are also hermit cells a bit lower down the mountain.

Our final stop of the day was Jericho, the oldest continuously-inhabited city in the world. We didn't go inside the ancient archeological site, but could see the remains of the old cities and walls, and 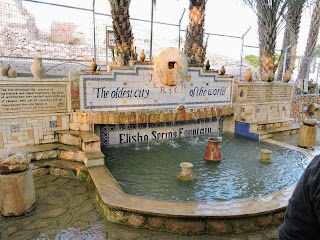 the Elisha fountain. We sampled Jericho dates -- very moist and sweet, but one was more than enough for me.
We were in the Palestinian Authority area, so had to go through a checkpoint to get to Jerusalem. We weren't stopped, so we were soon at the Olive Tree Hotel. We were warmly greeted by our EO host staff and soon in our comfortable room. Dinner was nice, with lots of choice for most people (not so much for me; it's a garlic-heavy menu) and some good conversation.


More Photos from the Day - Dead Sea to Jerusalem