Nice breakfast with lots of variety, then onto the bus and into traffic rolling toward downtown Cairo. 5 lanes of traffic in 4 marked lanes most of the time. In the city, no lanes at all and pedestrians working their way between vehicles everywhere. Sidewalk food stands. Most women wearing head coverings and quite a few fully-covered. Many men also wear traditional dress. 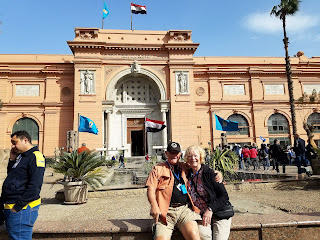 At the Egyptian Museum we saw treasures beyond counting or description. Much of the King Tut exhibit is still here, though many artifacts have been relocated to the new museum in Giza. This old building is lovely, having been designed in the late 19th century and built in the early 20th. It will be preserved but we didn't hear in what capacity. 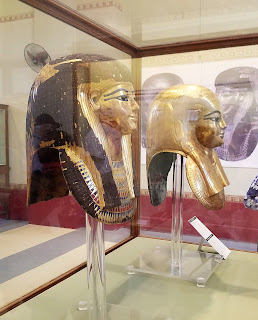 Going back to Giza we drove along the Nile, with luxury hotels and embassies on our left. We could see faluccas on the river. In general, there are no traffic signals, but some intersections have traffic police directing. We have a police vehicle escort as well as our on-board escort, who is always helpful. 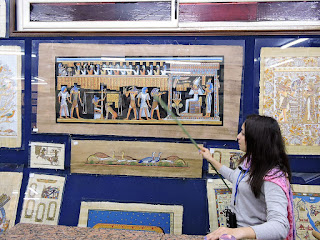 It was most interesting to see how the papyrus plant is turned into durable paper, at the Abu Simbel Papyrus Institute, and the store had many beautiful items available. Some even had an alternate image that glows in the dark.
The lunch restaurant was dark and intimate-seeming, though large. The meals were huge. Those of us who cannot eat this food watched in awe as the others gamely tried to work their way through such a variety of food.
One aspect of moving around in this city is getting off and onto the bus into traffic, since often we had to pull to the left curb. A phalanx of minders (our guide, driver and escort and usually someone from the premises we're visiting) line up around the door, to prevent traffic from hitting us. At lunch, one of the assault weapon-armed escorts stood in the position to be encountered first by approaching traffic. They gave him wide berth.
We made 3 stops at the Giza Plateau. 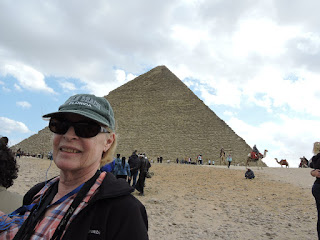 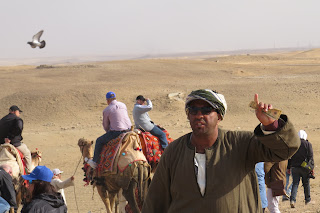 First at the base of the Great Pyramid, where a few climbed up a little way for photos. We had to make our way among horse carts and camels to and from the bus, so had to watch our step. At a vantage point, we had a group photo taken and got our own shots looking down toward the pyramids. Four of the guys decided to take a camel ride and looked quite the wranglers up there. We stopped for just a minute beside the Sphinx for photos.

Last stop of the day was Flower Cotton -- beautiful soft Egyptian cotton clothing and bedding. Just inside the door I spotted suitcases for sale. Seemed kind of pricey, but worth it not to have my clothes and belongings scattered all over some airport luggage carousel. So now I have a new suitcase that I think will prove to be nicely recognizable, and should make it to the end of the trip, neither of which was true of the old one.
Very early start tomorrow [ 2am wakeup, 3am departure ]as we head to Aswan, so we had an early dinner and bed.