We got all packed up for the next transition and were on the bus by 8:20. It was a 5-minute drive to the wharf where we boarded a small boat to cross the Sea of Galilee. They raised the U.S. and Canadian flags and then we sang both national anthems -- thank you American friends for lending your voices to O Canada! I handed out the words so they could, and they rose to the occasion! It was such a nice moment. Pastor David led a devotion and the sound system played lovely spiritual music for the whole crossing. On the far side, we walked through a modern complex where we had a coffee break before getting back on the bus. 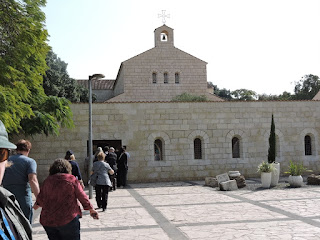 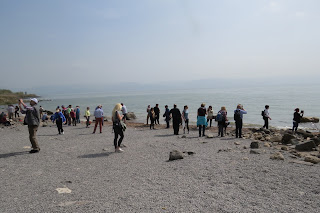 I walked down to the edge of the water -- much lower than on our previous visits -- and we stepped inside to touch the rock where Jesus prepared breakfast for the disciples and told Peter he was the rock on which the church would be built. 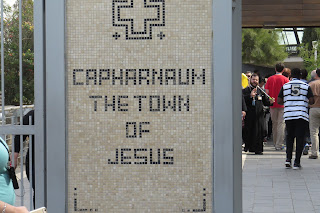 Capurnaum has the ruins of a synagogue where Jesus taught. In fact there was a newer, white stone synagogue built on top the the black stone one from his time. 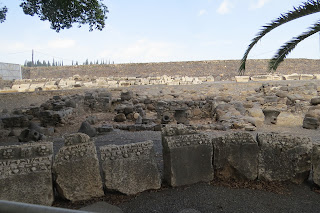 There are also the remains of an octagonal Christian church and Peter's house. There is a beautiful modern church built over them. It's in a really pretty, peaceful area of the country. That was our last visit of the tour, except the lunch stop at (I think) Kinneret in Tiberius. We then set out for Jordan.
The border crossing was quite straightforward but involved several steps and took awhile. We had to leave behind Ibrahim, our driver and our bus and board the same bus with the same driver we'd had before in Jordan, with a new guide and tourist police escort. It's a long, steep climb to Amman, on roads that cling to the sides of the mountains, but the scenery and the sunset were spectacular.
In Amman we checked into the Crowne Plaza Hotel and met in the dining room for by far the best meal yet on this trip. It didn't hurt that we had the lovely quiet room to ourselves, but the staff were friendly and helpful, the food delicious and plentiful. Perfect for our last dinner as a group.
Meanwhile, my suitcase got severely damaged on one corner. Thank goodness Marcia carries duct tape when she travels and that seems to have provided at least a temporary solution.