In the morning, the boat that had been blocking our view had moved on, and from the window of our cabin we could see across to the west side of the Nile. We were told that the east side is the living side, and the west is for the dead, and indeed what we saw over there was a hill of tombs. We learned that nobles from the Middle Kingdom are buried there and that inside they are decorated colourfully. We boarded a smaller boat for the trip to a 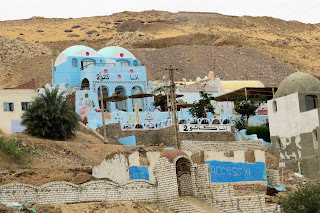 Nubian village, and along the way saw faluccas on the water, and at one point a small boy suddenly appeared beside the boat, grabbed onto it, and sang to us. Of course we handed him dollars. 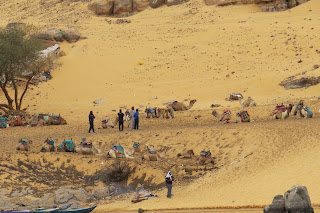 We could see the edges of the Great Sea Sand, that is the desert between Egypt and Libya. The beautiful Aswan Botanical Garden was a note of colour along the shoreline. 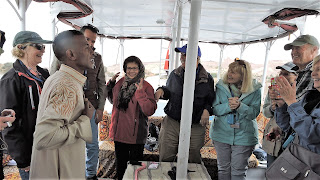 During a lull in the scenery, the boat captain got us all up singing and clapping and laughing, and he also had some very nice Nubian wares for sale. The tomb of Aga Khan III and his wife, built in the 1950s, stands on a hill along this shoreline too. This area is noted for having the best red granite in the world, which was used for tombs, obelisks and pyramids. We saw lots of exposed rock that was covered before the High Dam was built. 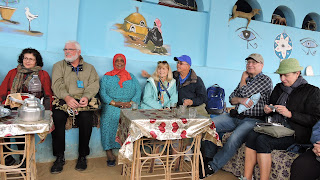 We really enjoyed the visit to the Nubian Village. The whole place is like a colourful bazaar. We were entertained with tea at a home in the village, and introduced to the crocodiles kept by the family -- 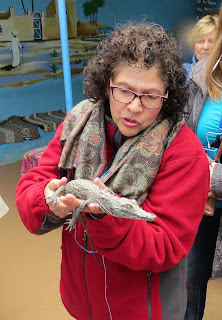 we even held a baby one.  They keep them until they are 11 or 12 years old and then release them on the other side of the dam where all the crocodiles are.


From their roof we could see out over the village, and as far as the Aswan Dam. We did a bit of shopping at a spice store and sand art store, then moved on to the school. Saturday is a day off, so we sat in for the students while 2 teachers gave us an Arabic and Nubian language lesson. 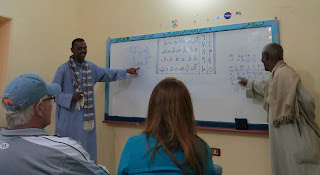 We re-boarded the excursion boat at a very precarious place, but all got safely back on board. On the trip back we passed Elephantine Island, where the exposed rocks resemble elephants.
We were back to the Nile Goddess in time for lunch, then relaxed while we sailed 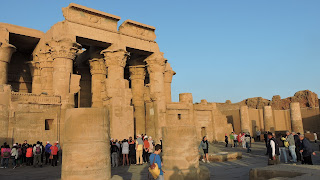 to Kom Ombo, where we visited the temple. Much of it has been damaged by Nile floods and by Romans and Christians who disagreed with what was depicted there, but there is still lots to see. Besides scenes and cartouches of the coronation of a pharaoh, there are a calendar (3 seasons of 4 months each, with 3 10-day weeks per month), a chart of surgical tools and healing oils, and a Nilemeter. It was crowded and the walk there and back was crowded with vendors, but well-worth the visit. We were barely back on board when we set sail for Edfu.
We made it an early evening, since we will be up at 5 tomorrow.