We said good-bye to the very attentive staff of the Nile Goddess, and boarded the bus to cross the Nile to the west side -- the side associated with death. 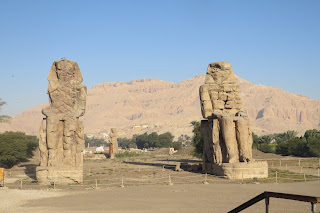 The first stop was the Memnon Colossus statues, where we encountered a mob of vendors, and saw hot air balloons descending after their sunrise flights over Luxor. What a view they must have had! 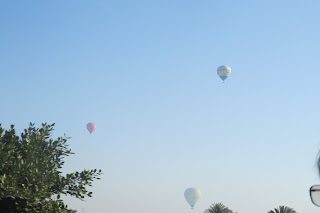 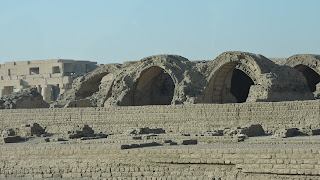 We passed Joseph's Stores, which he had built to store grain during the 7 good years in preparation for the 7 years of famine foretold in Pharaoh's dream, in 2000 BCE.
Along the road we saw the ruins of the Ramesean Temple Houses, from which people were evicted because they were mining the rich lode of antiquities in the area and selling them out of Egypt.


The road to the Valley of the Kings and Queens is narrow and winding. It was pretty hot, so we were happy to take a trolley from the main entrance to the area of the tombs. This was not a publicly-flaunted storehouse of wealth like the Giza Pyramids. 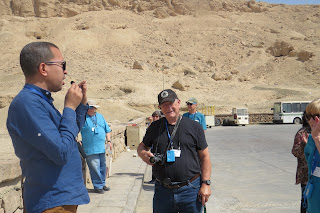 Tombs were dug into the cliffs and disguised, but still the grave-robbers found them. This is the site of King Tut's Tomb and those of many other rulers. We were able to visit 3 tombs, but not that of King Tut, though we did see its entrance. His mummy is still there, resting in the middle of his three nesting coffins. 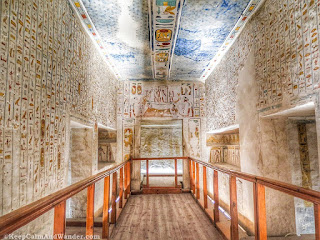 We were astonished by the vibrancy and immediacy of the paintings on the tomb walls. They could have been painted last week. Each tomb is different and interesting in its own way. Naturally, on the way out, we were besieged by vendors. [ photos not allowed, these we saw but are Google Images ] 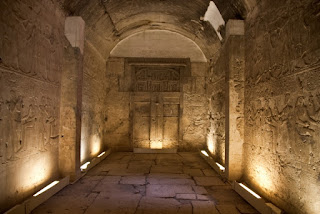 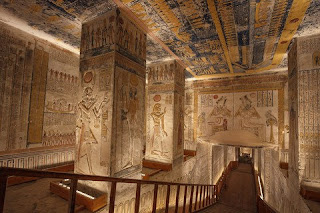 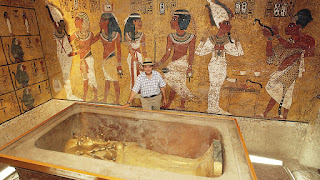 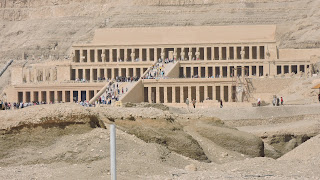 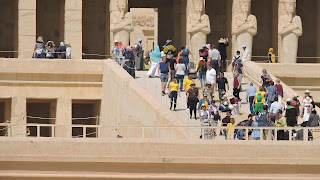 The Temple of Hatshepsut is on the other side of a ridge, directly backing on her tomb in the Valley of the Kings and Queens. It is 3 storeys high, with paintings depicting, among other things, her Nubian excursion that brought back many kinds of plants. Huge statues overlook the vast terraces. 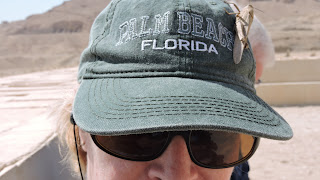 As we sat in the shade listening to the story of this place, a giant insect, a locust I think, landed on my head and stayed for about 5 minutes. Finally it gave a big thump and flew away. People thought it was a bird, it was so big. 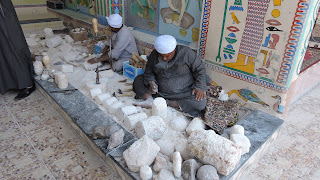 Next up was a visit to an alabaster workshop and salesroom. We saw how alabaster is prepared and finished into beautiful objects, then were subjected to some fairly heavy selling. 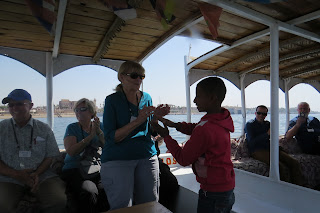 A motorboat took us across the Nile to lunch. The boy on board put on some Egyptian music and danced with each of the women in turn, garnering a few dollars in tips. Smart boy. At the waterfront restaurant, the usual big lunch was served. 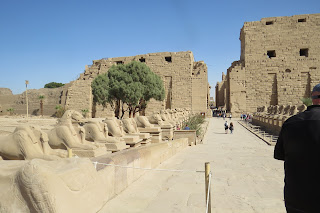 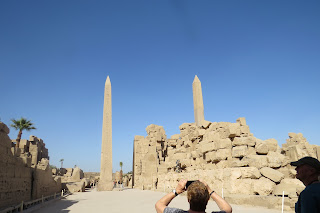 Our final visit of the whole trip was the astonishing Karnak Temple, the largest temple in the world. Much of it is in ruins, but it's very evident how amazing it was in its day. As usual, Mostafa was very thorough in his explanations of the various areas of the temple and the meaning of the carvings and paintings we were seeing.

In late afternoon we left Luxor Airport for Cairo and so began our journey home.
EO had booked us rooms at the Le Meridien Cairo Airport for the few hours until our departure -- what a lovely hotel. We had dinner at the EVOO restaurant, freshened up, rested for a little while and left for the airport at 10:30 pm.