The day got off to a bad start for Larry and me when we didn't get the 2am wakeup call. That made us worry that our bags wouldn't be picked up at 2:30, so I called the desk and waited while Larry made his way to the lobby. Eventually, close to 3 am, the porter arrived for our bags. I followed him to the lobby, where the manager offered his apologies that we were delayed. Then at the airport, both Larry's and my boarding passes were rejected by the machine for boarding. Luckily, someone was able to do a manual override and all was well.
We landed in Aswan at about 7am. The bus took us first to the High Dam, 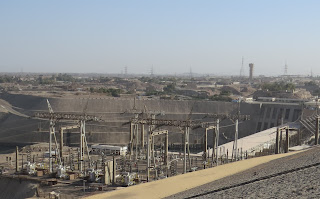 where we got off and took  photos of the dam and Lake Nasser that was formed when the dam was built in 1961-1971. The high dam provides much of Egypt's electricity. 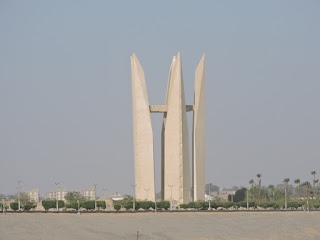 A stylized lotus sculpture symbolizes the cooperation between Russia and Egypt that resulted in the dam. Our guide reassured us that that relationship is no longer the primary one for Egypt, but rather the one with the U.S. 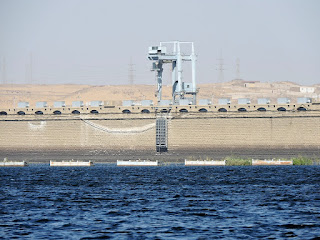 Driving from there we drove over the original Aswan Dam, built on the First Cataract of the Nile in the early 20th century. 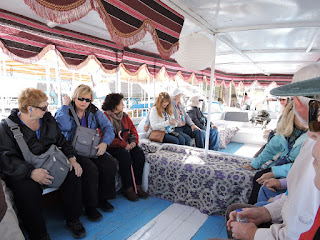 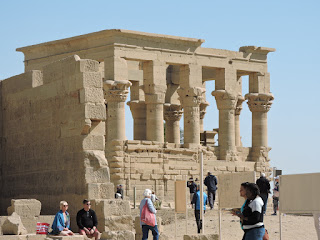 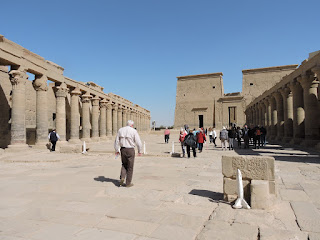 We boarded a boat for the trip to Agilika Island and the Temple of Philae. What an amazing place! It has Ptolemic carvings, some of the last hieroglyphic inscriptions and has also been used as a Christian church. Perhaps the most astonishing of all is the fact that it was moved stone by stone from a nearby island that was flooded by the damming. In that UNESCO project, German and Egyptian engineers numbered every one of the thousands of rocks so they could be re-assembled to accurately reproduce the original site.

The last stop of the morning was a perfume/oils shop. I stayed on the bus, but heard that it was quite the sensory experience, and I noticed a few bags of product coming aboard the bus. 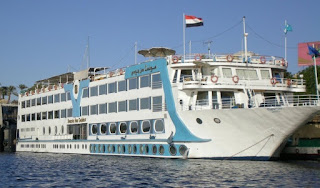 We boarded the Sonesta Nile Goddess in time for lunch, and then everyone took a nap. I woke up at 4:30, just in time for tea on the sun deck, but I had it to myself. Everyone else was still sleeping.
Dinner was delicious. 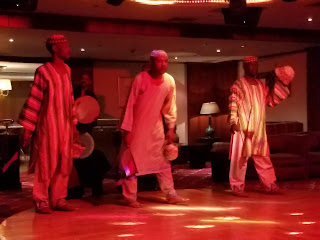 The evening show was a Nubian group who entertained us with songs and dance. They began with traditional dances, then a couple of comic numbers, then got several of us up dancing with them. Love their sense of humour!


More Photos of the Day of transition to Aswan