We were up early to get ready for the flight to Cairo. Nice breakfast and easy run to the airport. After making our way through a few layers of security, with the help of our EO representative, we settled into the comfortable boarding lounge.
The Queen Alia Airport is an interesting modern facility, with quite a few touches of luxury. Once aboard the Egyptair plane, attentive hosts made us very comfortable, stowing our bags and showing us to our seats for the 2-hour flight. We were immediately served a nice lunch of cold cuts and salad.
Landing in Cairo we were met by our EO rep, Harry, who herded us through all the formalities very quickly and got us onto a bus. He introduced our guide Mostafa, driver Mandy (?) and police escort Hassan. [aside from Hassan we had a military heavily armed vehicle with the bus at all times ]
On the way to our first stop, Mostafa briefed us on our itinerary and what we were seeing along the way. Since he is an Egyptologist with a Masters degree, we know we'll be getting the real history of this country. We passed the huge city of the dead, that is a cemetery dating back about 1000 years, the impressive and lovely Mohammed Ali Mosque, the Saladin fortress and aqueduct. 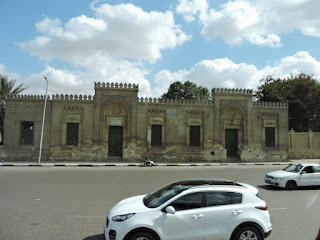 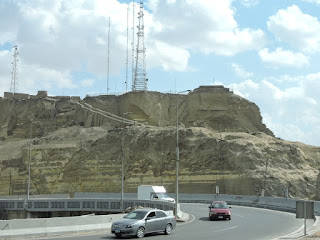 All the time Mandy was dealing with tangles of traffic, horns, sirens. Eventually we arrived at a restaurant where most of us ate a large lunch, and the rest sat in the courtyard enjoying the sun and warmth. 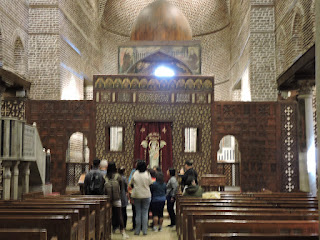 We walked through the Old City to a Coptic Orthodox Church that sits over the cave where the Holy Family spent 3 months hiding from Herod's soldiers who had pursued them into Egypt. The well they used is there, still with water. The church is centuries old and still in use. 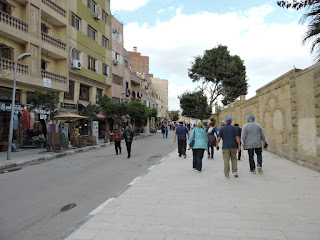 From there we walked through narrow streets lined with market stalls to the Ben Ezra Synagogue, a former church that is the traditional site of the burial of Abraham and where the baby Moses was found in a basket in the Nile. It is no longer used for worship. 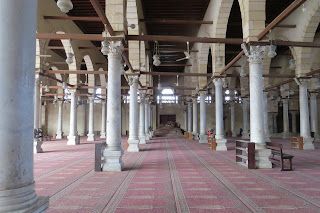 Our final stop was the oldest Mosque in Africa, dating from about 641 CE. We had to step aside when we arrived, to make way for a funeral procession that was just leaving. [Larry waited outside with the guard and a second coffin was rushed out of the Mosque.  This might have been related to the loss of many lives in a train wreck that occurred just that morning ].  It is a vast beautiful structure, with the centre square open to the sky and covered areas around the four sides. There are places for study and for worship. The ladies who did not have head coverings were given long hooded colourful garments to wear while in the mosque. My baseball cap was deemed sufficient so I didn't get to wear one. We left our shoes near the door, in the keeping of a gentleman who watched over them for us for a dollar. We retrieved them again as we left.
Leaving there, we saw more of the city through the bus windows, including pigeon houses on the roofs of many buildings. People were on roofs waving flags to signal to the birds that sunset was coming and they should return home. Some large apartment buildings seem to have collapsed floors and walls in some units, while others in the same building are occupied. Scary contrast to the pyramids that have stood solid for a few thousand years. 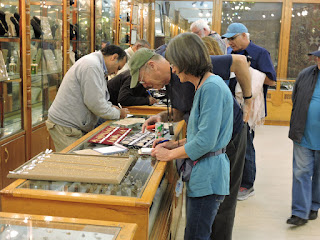 [ Janice failed to  mention the stop at an antiquities shop where some acquired jewelry etc ]
Crossing the Nile, we soon caught sight of the pyramids and the new, sprawling Egyptian heritage museum. It isn't open yet, and won't be until the end of this year. The hotel is so near that some of us have a view of the pyramids from their windows. We look out over the huge pool area.
Dinner was very nice. I was given an excellent tour of the garlic-free items on the buffet and enjoyed more variety than I've usually had. Our room is very comfortable, verging on luxurious, and we can sleep in a bit tomorrow, so looking forward to a nice night.