Apparently when I wake up at 5 am, my klutz factor rises sharply. I managed to miss my step at the Edfu temple and crash to the ground. My camera broke the fall to some extent, and even survived. I've got some sore spots but nothing major, thankfully. A little later, John did much the same thing, in sympathy, he said. There's talk of getting us "I fell for Edfu" teeshirts.
But enough about me -- 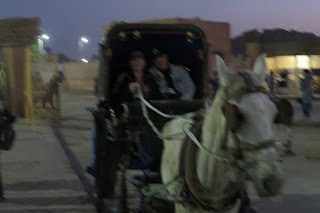 it was an amazing excursion, starting with a wild carriage ride through the streets of Edfu. Our driver, Azziza, must be part of the Andretti family. Why do we always get the one who must pass everyone to be out in front? 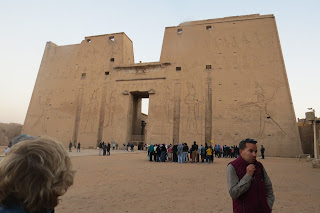 The temple is stunning. It is the second largest and best preserved pharaonic temple in Egypt. The reason it's so well-preserved is that it was completely buried in sand for centuries and only uncovered in the 1920s or '30s. There is the usual damage by flooding, Romans and Christians, and blackening of walls and ceilings from the lamps and incense of Christian occupation. But wall after wall is densely covered with carvings. Many cartouches and inscriptions but also whole stories told in figures that are larger than life. The struggle between good and evil, the ground-breaking ceremony for the temple, the coronation of the pharaoh. A calendar, a Nile-meter (which I now know determined tax rates depending on how high the Nile rose). Azziza rushed us back to the ship where we were first to arrive, much to Jamey's disappointment. She was sure her driver was the fastest. It was 7:30am and time for breakfast. We went through a lot of coffee, so naps might be out of the question today. 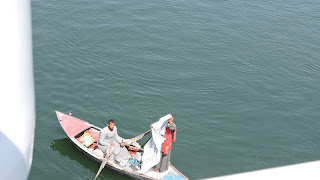 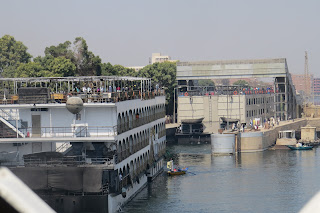 We gathered on the sun deck at 11:30 to watch the process of going through the lock. There were numerous vendors in boats and on the piers, willing to toss various things up to the decks and expect money to be tossed back accurately enough for them to catch.
As soon as we docked at Luxor (known to the Greeks as Thebes), we boarded a bus into the heart of the city. Bill, Teresa and John stayed at the le Meridien Hotel, while the rest of us had a very peaceful sail (and tea) 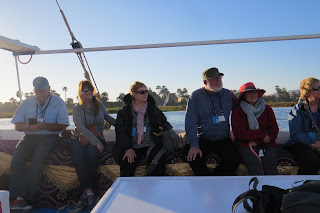 in a falucca while we watched the sun set. From there we took a carriage ride through the city and saw how its life goes on, including the local market, from an interesting standpoint. The market streets are so narrow we could hardly pass. 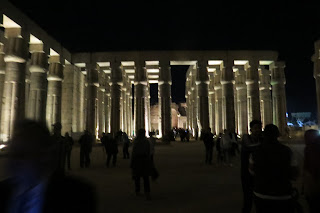 Then, what had to be the most impressive site of the trip -- the Temple of Luxor -- lit up under the stars! I've never seen anything like it, with its rows and rows of massive columns, huge statues, an amazing obelisk, and a great deal of carving in different styles, reflecting the many years of construction. Much of it similar to what we've seen, but on a grander scale. Words fail.
Back to the ship, dinner, bill paying and packing to leave for home tomorrow.

More Pictures of the day